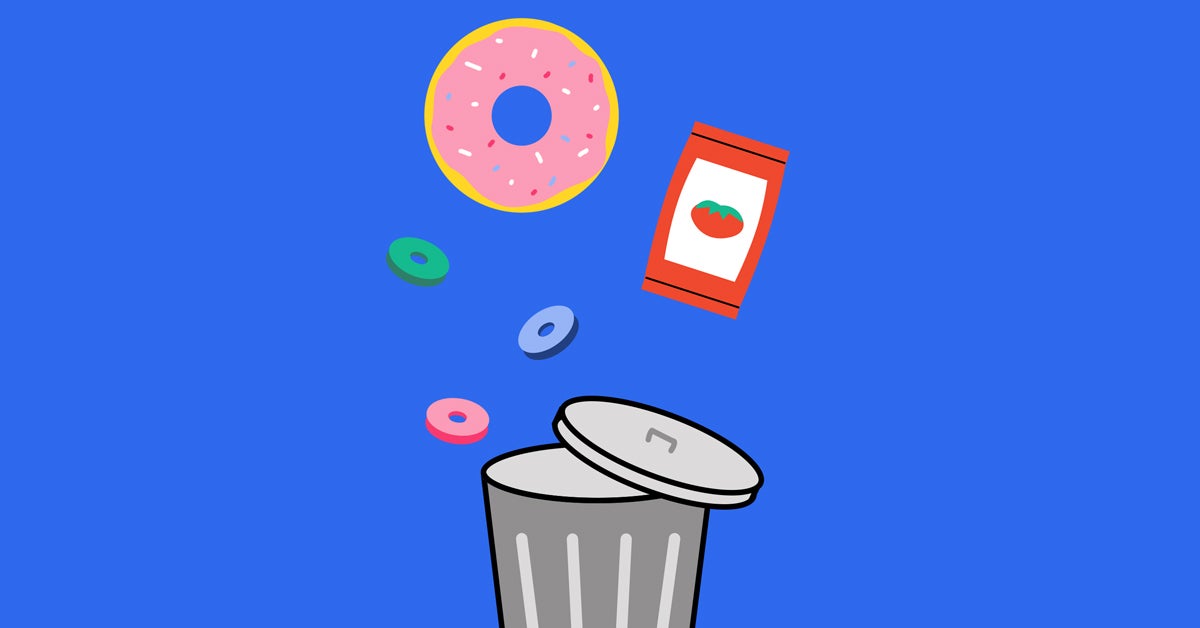 Don’t be alarmed, but something’s hiding in your food. A potentially harmful substance lurks in many foods you’d never suspect — from the cereal you had for breakfast to the dressing on your salad.

Sugar has become public enemy No. 1 when it comes to Americans’ health. In an effort to listen to doctors’ orders and government guidelines about consuming less fat and cholesterol, Americans turned to “healthy” low fat foods that were actually loaded with sugar.

In reality, we eat way more — nearly 12 teaspoons per day for women and more than 17 teaspoons for men, according to a 2016 study.Park S, et al. (2016). Sociodemographic and behavioral factors associated with added sugars intake among US adults. https://www.ncbi.nlm.nih.gov/pmc/articles/PMC5068358/

In its natural state, sugar is a relatively harmless carbohydrate that our bodies need to function. It’s in fruits, vegetables, and dairy as a compound called fructose or lactose. The problem comes when sugar is added to foods during processing for flavor, texture, or color.

Eating too much added sugar has many health effects, the most obvious being weight gain. Added sugar drives up your insulin levels, messes with your metabolism, and causes those calories to turn right into belly fat.

Weight loss is just one of the many possible benefits of cutting back on the sweet stuff. Below are 21 more legit reasons — besides fitting into your skinny jeans — to tame that sweet tooth for good.

1. It can lower your blood pressure

High added sugar intake can lead to weight gain, which can increase your risk of high blood pressure. Added sugars can also raise your blood pressure on their own. In fact, research shows that sugar may be as big of a problem as salt when it comes to hypertension.DiNicolantonio JJ, et al. (2014). The wrong white crystals: not salt but sugar as aetiological in hypertension and cardiometabolic disease. DOI: 10.1136/openhrt-2014-000167

High blood pressure increases your heart’s workload and can damage your arteries over time. Eventually, this can lead to heart disease, heart attack, stroke, kidney damage, and artery disease.

2. It can lower your bad cholesterol

When you eat too much sugar, your liver pumps out extra LDL (bad) cholesterol. A sugary diet also lowers your HDL (good) cholesterol. Together, high LDL and low HDL can lead to clogged arteries and heart disease.

3. It could lower your heart attack risk

One simple swap to cut your risk: Ditch the soda. Sugar-sweetened beverages are linked to an increased risk of coronary heart disease. Plus, there are loads of delicious carbonated waters on the market these days (we’re pointing at you, La Croix).

Despite some online opinions to the contrary, eating sugar doesn’t cause diabetes. That said, a high sugar diet contributes to weight gain, which does increase your risk of developing type 2 diabetes.

The buildup of fat makes your body more resistant to the effects of insulin. To compensate, your pancreas pumps out more insulin. Eventually, your pancreas can’t keep up with your body’s increased demand, and your blood sugar rises.

As the name suggests, fatty liver disease is a buildup of fat in your liver. When you gain weight, so does your liver. That extra fat can damage your liver to the point where it can’t properly filter your blood.

Fatty liver disease is a common and significant risk factor for diabetes, heart attacks, and even cancer. The good news is that you may be able to combat it with a major diet adjustment.

6. It may help reduce your risk for cancer

Although research hasn’t proven that sugar directly causes cancer, there are some pretty compelling links between the two. Cancer cells — like other cells in your body — use sugar as fuel. And eating a high sugar diet leads to weight gain, which is a definite risk factor for cancer.

A 2013 study found that diets rich in refined sugars, as well as meat and other animal products, were linked to a greater risk of pancreatic cancer.Bosetti C, et al. (2013). Nutrient-based dietary patterns and pancreatic cancer risk. DOI: 10.1016/j.annepidem.2012.12.005

After following subjects for more than 2 decades, researchers in another recent study found that sugars and sugar-sweetened beverages increased the risk of type 1 endometrial cancer among postmenopausal women.Inoue-Choi M, et al. (2013). Sugar-sweetened beverage intake and the risk of type I and type II endometrial cancer among postmenopausal women. DOI: 10.1158/1055-9965.EPI-13-0636

7. You may breathe easier

If you’re looking for a candy bar to perk you up and get you through the afternoon work slump, you might be disappointed. In fact, the very idea of a “sugar rush” could be a myth.

For a real pick-me-up, rely on slow-burning carbs and high protein foods. Spread some peanut butter on an apple or put a slice of cheese on whole grain bread.

9. It will help keep your brain sharp

Research shows that a high sugar diet negatively affects mental function. In a sense, sugar might rewire your brain. Eating too much of it can alter the structure of the hippocampus — the part of your brain where your memories take hold.Reichelt AC, et al. (2018). Dietary influences on cognition. https://www.ncbi.nlm.nih.gov/pmc/articles/PMC6071323/

10. You may be less likely to get dementia

There’s a strong link between blood sugar and dementia, which researchers have been trying to figure out for years. People with diabetes are at higher risk for Alzheimer’s disease. Some researchers even refer to Alzheimer’s as “type 3 diabetes.”

The connection could have to do with the way your brain responds to insulin, a hormone that moves sugar from your blood into your body’s cells.

A 2018 study illustrated the connection. After following more than 5,000 people for 10 years, the authors found that participants with high blood sugar had faster rates of mental decline than those with normal blood sugar.Zheng F, et al. (2018). HBA1C, diabetes and cognitive decline: The English Longitudinal Study of Ageing. DOI: 10.1007/s00125-017-4541-7

11. It may reduce your risk of depression

Eating sweets produces a quick sugar “high,” but that rush is short-lived. Several studies have linked diets high in sodas, juices, pastries, and other sugary foods to depression.

One study found that older adults who drank more than four servings of soda per day were 30 percent more likely to be diagnosed with depression than people who drank unsweetened water, coffee, or tea.Guo X, et al. (2014). Sweetened beverages, coffee, and tea and depression risk among older US adults. DOI: 10.1371/journal.pone.0094715

There are a few possible reasons for the connection. One is that sugar increases inflammation in your body, which can have a depressive effect on mood. Sweets also affect your body’s insulin response in a way that might alter your hormone levels.Knüppel A, et al. (2017). Sugar intake from sweet food and beverages, common mental disorder and depression: Prospective findings from the Whitehall II study. DOI: 10.1038/s41598-017-05649-7

12. You’ll break your addiction to the sweet stuff

Turns out, drugs aren’t the only substance you need to “just say no” to. You can get hooked on sweets too. When you eat lots of sugar, your brain releases chemical messengers like dopamine, which make you feel good.

Researchers have learned from animal studies that rats who “binge” on excessive amounts of sugar develop symptoms of physical addiction and signs of withdrawal when they stop.Wiss DA, et al. (2018). Sugar addiction: From evolution to revolution. DOI: 10.3389/fpsyt.2018.00545

Eating too much sugar shuts down healthy dopamine signaling. The result: It takes more and more sugar to fire off those same pleasure signals.

Eating too much sugar might trick your brain into constantly thinking you’re hungry. In part, this is because sugar contributes to weight gain. Excess weight makes your body resistant to the effects of leptin, a hormone that normally signals your brain that you’re full.

Foods that are high in sugar are also low in protein and other nutrients that fill you up. So shortly after you eat a slice of cake or a candy bar, you’re ready to eat again.

14. It could keep your skin looking young

And now for the appeal to your vanity: A lifetime of eating too much added sugar can leave your skin dull, wrinkled, and prematurely aged.

Sugar in your bloodstream attaches to proteins to form advanced glycation end products, or AGEs, which is an appropriate name for what they do!Nguyen HP, et al. (2015). Sugar sag: Glycation and the role of diet in aging skin. https://www.skintherapyletter.com/aging-skin/glycation/

AGEs damage collagen and elastin, the protein fibers that keep skin firm and elastic. That damage leads to the wrinkles and drooping that some experts refer to as “sugar sag.”

Sugar doesn’t cause acne, but it can aggravate breakout-prone skin. That’s because sugary and highly processed foods cause inflammation, which helps fuel breakouts.

“Inflammation caused by excess sugar intake has been linked to other skin conditions as well, like psoriasis,” says Marisa Moore, a registered dietitian in Atlanta.

Consuming too much processed sugar is a surefire way to develop cavities, according to a report issued by the World Health Organization in 2017.

When bacteria in your mouth break down refined sugar, it produces acids that eat away at tooth enamel. This is different from natural sugars, such as those that come from fruits, because whole foods stimulate saliva flow and protect your teeth.

Eating or drinking too much sugar also lowers your immune system’s response to foreign invaders. Simple sugars can inhibit phagocytosis, the process by which your white blood cells destroy viruses and bacteria.

A stronger immune system could lead to fewer illnesses. That means fewer trips to the doctor and less time spent in waiting rooms, reading germy copies of old magazines.

18. You’ll save money on healthcare bills

In addition to pocketing the cash you would’ve spent on junk food, you’ll save moola on those trips to the doctor, the dentist, and specialists. Plus, your health insurance premium may stay stable if you avoid type 2 diabetes and other chronic conditions linked to excess sugar.

Growing sugarcane requires a ton of water and is often very destructive to the habitats in which it grows, according to the World Wildlife Fund. Some of the regions where sugarcane grows, like the Mekong Delta in Vietnam and the Atlantic Forest in Brazil, are already fragile habitats.

Families of sugarcane workers have lived in extreme poverty, hunger, and misery for generations. That’s why sugarcane has earned a reputation as a “hunger crop.”

Giving up or cutting back on sugar reduces your support for the plantation owners and companies that perpetuate these violations.

Here at Greatist, we’re all about balance. While it may be impossible to avoid sugar-encrusted desserts, breads, or seasonal lattes all the time (and who would want to?), there’s no doubt that eating less of the sweet stuff may lead to long-term changes.

Little swaps — sparkling water instead of soda, fruits instead of fro yo — can make a world of difference over time. You may see improvements in your overall health and wealth while also helping the planet. Now that’s something we can get on board with.